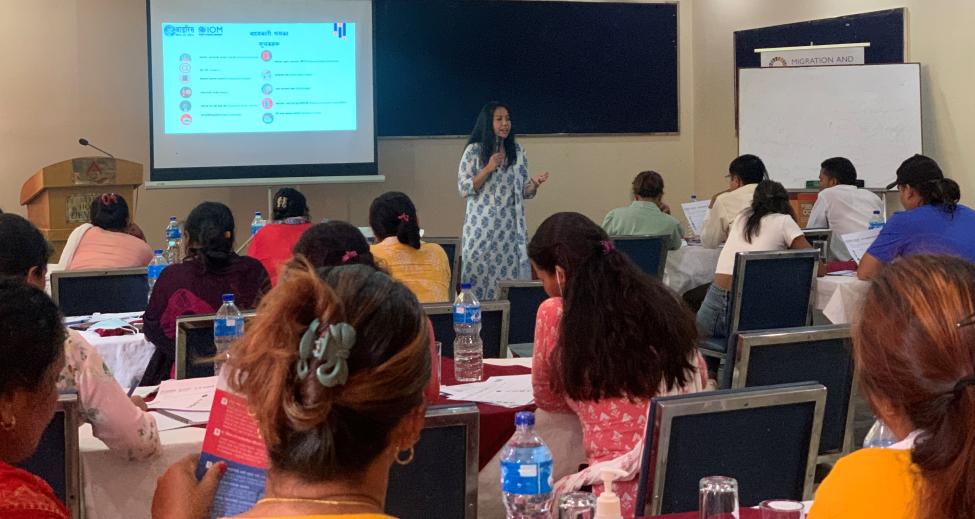 “Sadly, there are many reports and testimonies about migrant workers being exploited during the recruitment and placement phases by unscrupulous labour brokers or recruiters. Various studies provide evidence that Nepal is no exception,” said Lorena Lando, IOM Chief of Mission for Nepal.

“Through this training programme, IOM ultimately supports the government of Nepal’ s effort in the operationalization of the Global Compact for Migration (GCM) in the country and achieving sustainable development goals such as target 10.7 for safe and regular migration,” she added.

Labour migration remains an important choice for many Nepalis. In recent years, the Government of Nepal issues over 350,000 labour permits for foreign labour migration yearly according to a study conducted by IOM and the Ministry of Labour, Employment and Social Security (2021).

The two-day training, organized by the International Organization for Migration (IOM), aims to raise awareness and promote ethical recruitment practices, based on the International Recruitment Integrity System (IRIS) standards to supporting the rights of migrant workers who are potentially exposed to risks and vulnerabilities during the migration cycle.

IRIS is IOM’s global flagship initiative that was developed to promote ethical recruitment and fair labour practices and increase the capacity of relevant stakeholders including the government and the private sector to reduce risks and vulnerabilities of labour exploitation of migrant workers, including human trafficking and forced labour, during any stage of the migration cycle.

IOM Nepal has been working to promote ethical recruitment among private sector, civil servants, civil society assisting migrants and youth leaders in Nepal since 2013. It has organized such trainings in other provinces such as province 1, Madhesh, Bagmati, Gandaki, and Lumbini and trained a total of over 100 participants.

Ensuring No Community is Left Behind: IOM Trained Over 550 Rural and Urban Municipalities on Localization of Disaster Risk Reduction and Management

Subscribe to IOM newsletter to receive the latest news and stories about migration.